The format for which WCAS became known and which so many people wanted to "save" evolved into being in the early 1970s during the time that Rick Starr was program director. In his recollections of those years, Rick gives generous credit to several other staff members for the end result. It is those recollections which prompted the creation of this page, and they may be found here. 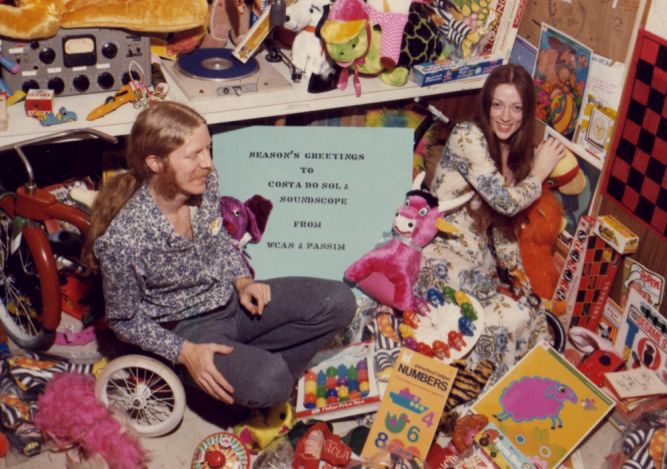 
Early 70s and Beyond - The Signoffs

As a station licensed for daytime broadcasting only, WCAS had to signoff each day at around sunset. The exact time for each month was specified in the station's license, and during the winter months, that might fall right in the middle of afternoon drive time. Sometime in the early 1970s, a number of humorous signoff productions were created to provide an alternative to the usual boring announcement and playing of the national anthem that had been customary on stations large and small back to the beginning of radio broadcasting. There have been more requests for those signoffs than for any other bit of past programming, both before and since this web page was created. So here finally, on September 12, 2009, we present the WCAS Daily Signoff. Today's signoff: Annoy the Neighbors.   Just like in the old days, it will be different each day.

On March 19, 1976, the ownership of WCAS officially changed to Wickus Island Broadcasting Corp. During the preceeding 3-4 years, the station had twice been scheduled to be sold to owners with plans to use the station for religious broadcasts. Comments from community groups were filed with the FCC protesting the prospective format change, and the FCC delayed approval of the sale until the prospective buyers withdrew.

Public Service Shows - 1976 and beyond

Apart from the music, WCAS was known for a rather unusual set of public service programs. Sunday morning was the usual time for stations to air such programs back when the FCC actually required some evidence of service to the community of license, and WCAS was no exception. However, our programs were created and produced by members of the local community and represented at least some of the diversity of that community. Here is the weekly Sunday morning lineup:

A state of emergency was declared in Massachusetts for a week while we dealt with, among other things, hundreds of cars abandoned on Rt 128 and other roadways. It also provided a unique experience for WCAS staff and listeners for that week -- the station was on the air at night, a practice allowed by FCC rules in times of emergency. The staff worked long hours, and volunteers came in to help gather and organize local storm-related information. Pete Stassa has provided several hours of off-the-air recordings of the station during the emergency. Part 1, Part 2, Part 3, Part 4, Part 5, Part 6, Part 7, Part 8, Part 9, Part 10.

On January 1, 1980, WCAS broadcast the "WCAS TOP 74" songs of the 1970s as ranked by WCAS listeners and staff. During December, WCAS asked listeners to vote for their favorite 5 WCAS songs. From several hundred responses, plus staff input, we compiled this list of the WCAS TOP 74 and counted down the entire list on January 1.

At the conclusion of the TOP74 countdown and just before signoff, we credited the many WCAS staff members who had added their talents and efforts to the station up to that moment. Click here for the audio.

Some of the air personalities from WCAS continued to bring music in the WCAS tradition to the airwaves. Here are a few I know of. Tell us if you know of others.

"Somerville" by David Misch. What else is there to say?
Wikipedia article on WCAS.